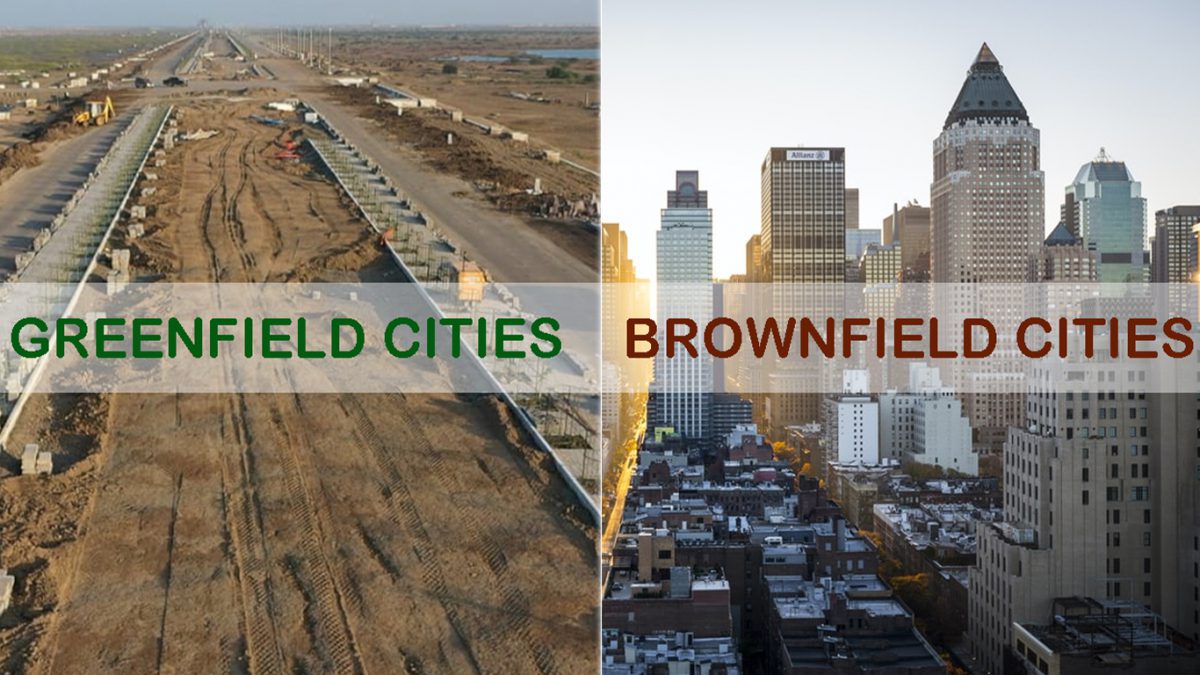 It is one of the largest cities getting developed along with (DMIC) Delhi Mumbai Industrial Corridor alignment.

In India, Greenfield Smart Cities program comes under Ministry of Commerce (through Department of Industrial Policy and Promotions – DIPP)

These cities already exisits and we try to convert them into a better developed city or a smart city by installing certain technologies like traffic management, city wide IoT Applications, wi-fi, widening of roads, expressways etc. Like we have Surat or Ahmedabad in Gujarat or Faridabad or Gurgoan in Delhi NCR.

Objective of Brownfield Smart Cities mission is to give a new direction to the existing cities as to how these cities can become Smart Cities so that better infrastructure like roads, expressways or better and managed transportation, education system, public facilities etc. will be provided. These cities are to be worked upon to make them self-sustainable smart cities.

Now, we will talk about Dholera SIR, because Dholera is being developed from barren land, completely from scratch, it has seen no development before, so this means Dholera SIR comes under the category of a Greenfield Smart City.

Like Dholera there are many Greenfield Smart Cities in the world which are either developed or getting developed from scratch, from a barren land.

Some of the examples of such cities are:

Belmont Arizona Smart City – Belmont is a proposed planned city in the Phoenix metropolitan area of Arizona, United States. Belmont consists of 24,800 acres (10,000 ha) of Greenfield land. Belmont is a partnership between a “humble billionaire” and my favourite Bill Gates and local real estate developers/investors. It will be a Smart City designed around emerging technologies.

NEOM – Saudi Arabia’s Crown Prince Mohammad bin Salman Al-Saud announced a $500 billion investment to develop NEOM, which is envisioned as an innovative new urban ecosystem on the Red Sea coast. Construction has already begun, with the first phase expected to be completed in 2025. NEOM, spanned over 26,500 Sq kms is conceived as zero-emissions zone that will further wind and solar energy technologies.

Masdar City – In the UAE, Masdar City is a master-planned live-work community with an emphasis on sustainability. The City was envisioned to cover 6 Sq kms with an estimated investment of US$18-22 billion.

Fujisawa: Spanning over 69.57 Sq kms is a sustainable smart town near Tokyo is one of the first Greenfield Smart Cities. Among its features are virtual fences to protect the residents.

Dholera is completely going to be a self sustainable smart city in which developable area will be only 422 sq kms and rest of the area will be kept for parks, water bodies, green spaces, solar parks etc. actually almost half of the designated area will be kept to maintain balance in nature.

These Future Cities are definitely going to chane the trend of developing new cities across the globe.